MP for Dome Kwabenya, Honorable Sarah Adwoa Safo will be forced to appear before the Privileges Committee by published summons as she cannot be reached right now.

According to the release, the summons of Adwoa Safo comes after all attempts to reach the Honorable Member by the Committee failed.

The summons form part of the Committee’s work, referred to it by the Speaker, Rt. Hon. Alban Bagbin, pursuant to Article 97(1) (c) of the Constitution, and Orders 15 and 16 (1) of the Standing Orders of Parliament, for consideration and report to the House, on the absence of the Member from Parliament for more than fifteen Sittings, without permission in writing of the Speaker, during the First Meeting of the Second Session of the Eight Parliament of the Fourth Republic of Ghana.

The Committee revealed that it has employed all available means, both official and unofficial to serve the Member with an invitation letter but to no avail. 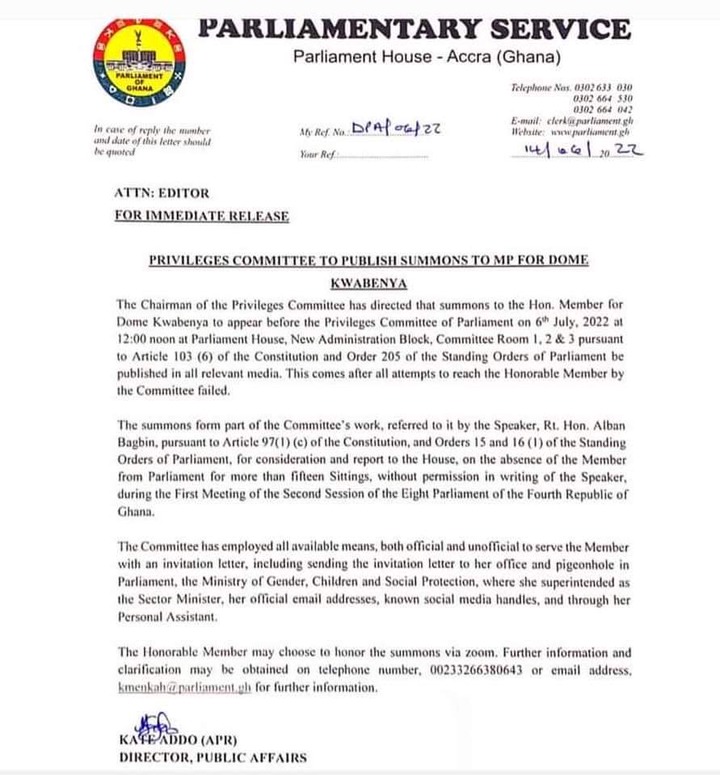 According to the committee, they have sent invitation letter to her office and pigeonhole in Parliament, the Ministry of Gender, Children and Social Protection, where she superintended as the Sector Minister, her official email addresses, known social media handles, and through her Personal Assistant but they couldn’t Adwoa Safo.

The release said that, the Honorable Member may choose to honor the summons via zoom.

Content created and supplied by: Currentworldnews (via Opera
News )

WATCH: You infected me with HIV – Lady cries out as she fights with her obroni lover